One can hardly suspect Foreign Affairs of being in love with Russia.

Back in the 1980s, the Soviet scholar V. Ovchinnikov pointed out that the magazine, since its foundation in 1922, had published 220 articles about Russia and “none of them was friendly.”

I tried to find out whether this was an exaggeration and bought an online Foreign Affairs subscription. After reading its Russia-dedicated publications over the years I had to share the opinion of the Soviet scholar — an opinion that is 35 years old. Communism has fallen, the Soviet Union has collapsed, but the Russophobia of this State Department-friendly magazine remains as solid as a rock.

There are, to be sure, different kinds of Russophobia.. It can be refined, knowledgeable and painfully accurate, spreading like a poison Or it can resemble a mud pie. This second kind of Russophobia may make a bit of noise as it splatters, but the sentiment it evokes is disgust at its stupidity and lies. Anton Barbashin’s and Hannah Thoburn’s Putin’s Philosopher: Ivan Ilyin and the Ideology of Moscow’s Rule falls into this second category.

A Russian journalist well known for yellow press articles (such as  Geopolitics three fingers up) and an American political activist famous for hateful anti-Russian tweets (like “Why the world cannot comprehend that Putin is a bald-faced liar is beyond me”) teamed up to dig into the history of Russian philosophy or – to be precise – in order to lynch Ivan Ilyin, one of the greatest Russian philosophers of the 20th century, but who is suspected of having compromising links with Vladimir Putin (the Russian president took part in the reburial of Ilyin’s ashes; he also cites the philosopher in his speeches).

The two authors tell us from the height of their authority that “ignominy was the best place for Ilyin to hang his historical hat. Never a deep or clear thinker, he was not truly an academic or philosopher in the classical sense, but rather a publicist, a conspiracy theorist, and a Russian nationalist with a core of fascistic leanings.”

Any even minimally competent student of Russian thought should have some familiarity with the scholarly output of Ivan Ilyin, and be aware that he was, in fact, an academic philosopher precisely in the classical sense of the word. His Ph.D. dissertation Hegel’s Philosophy as a Doctrine of the Concreteness of God is one of the most profound studies of the great German dialectician’s teachings.

The importance of Ilyin’s study can be illustrated by the fact that the “fashion for Hegel” in Paris in the 1930s was mainly based on his dissertation. In those years the Russian philosopher Alexander Kozhev (1902-1968) was lecturing in the French capital and promoting Hegel by citing Ilyin, albeit rewiring him in an atheistic manner.

I would be very much obliged to read the works by the respected Barbashin and Thoburn on the philosophy of Hegel, Plato or – at least – Spinoza in order to make sure they have the right to judge the competence of Ivan Ilyin as a philosopher.

Ilyin’s own original philosophic output is also well known to philosophy connoisseurs, even though it does inspire a lot of argument. In particular, his famous treatise On Resistance to Evil by Force develops the philosophy of anti-pacifism. According to Ilyin, taking up the sword against evil is not only a realpolitik guideline (in accordance with which Moscow is currently acting in Syria) but also a moral-philosophical postulate.

However offensive, these ritual-like exercises in spitting at Ilyin’s philosophic legacy are only the authors’ prelude.  Next, they go on the attack against Ilyin as a political publicist and conclude that he is, supposedly, a “fascist” who endorsed Mussolini, Hitler, Franco and Salazar.

OK, there is little doubt that Ilyin – like many other right conservatives with anti-communist sentiments – was a sympathizer of Benito Mussolini in the 1920s. His point of view was shared with G. K. Chesterton who wrote a book about the ‘positive Italian experience’ in 1929, and Winston Churchill who exchanged letters with il Duce for many years.

It is worth noting that already at that time Ilyin was not an admirer of the Mussolini regime. In his Letters on Fascism (publ. 1926) he wrote that the Russian “White idea” was more sound and clear than Italian fascism.

In Germany it took Ilyin much less time than Heidegger et. al. to figure out the nature of Hitlerism as a racist, totalitarian dictatorship hostile to all law. Contrary to many German, European and American intellectuals, Ilyin came into conflict with the Nazis in the first years of their power.

Barbashin and Thoburn directly falsified Ilyin’s biography in order to portray him as a “Nazi collaborationist.”  I quote: “he welcomed fascism as a rightful response to Bolshevism, supported Hitler’s right-wing aspirations, and bashed German Jews for their ‘sympathy’ with communism until he was fired from the university under political pressure in 1943 and fled to Switzerland a few years later.”

The reader is supposed to think that Ilyin was in Germany during almost all of World War II and, presumably, worked for Hitler, and that later he fled to Switzerland fearing the righteous anger of Allied Forces.

This is a bald-faced lie.

Ilyin was fired from the university in Berlin not in 1943 but in the summer of 1934 – precisely for refusing to take part in the anti-Semitic campaign started by Goebbels. The fake Ilyin scholars from Foreign Affairs simply swapped the 3 and 4 hoping that the uninformed Western reader would not notice the forgery.

In 1938 Ilyin was hunted by the Gestapo and was forced to flee to Switzerland where he wrote   articles supporting the Russian people in their fight for freedom against Hitler’s invaders and urging the Swiss to keep up their faith in democracy. He also expressed the hope – which did not come true – that due to collaboration with the Western allies Stalin’s regime would evolve in a direction at once more democratic and  more in keeping with the Russian heritage.

Since Ivan Ilyin had never been a Nazi, he did not have to renounce Hitler’s ideology which he never shared. All the same, his article On Fascism provides a strict and merciless assessment of German fascism.

Ilyin indicted it for its irreligiosity and its hostility to Christianity, for enshrining totalitarianism into law, setting up a one-party monopoly which led to corruption, for its extreme, militant chauvinism and racism as well as for its totalitarian, government-led economy.  He also castigated fascism for its idol-worshiping cult of the Fuehrer which led to demagoguery, servility and tyranny.

In cases when Ilyin did endorse Franco and Salazar – both of which in 1949 were American allies (and Salazar’s Portugal was a cofounder of NATO) – he did it because they were not fascists.

The authors of Putin’s Philosopher have ignorantly defined Ivan Ilyin as someone “interested in the idea of Eurasianism” while in fact he, in a certain sense, was the most pro-Western Russian philosopher of his day. He hoped (as  Alexander Solzhenitsyn hoped later, in the 1970s and1980s) that Western democracies could free Russia from communism and urged Russian emigrants to explain to the elites of the West that communism should not be confused with Russia, and that humiliating, dividing and destroying Russia did not serve the best interests of the West.

A powerful, nationally self-sufficient country with a market economy and democratic regime, serving as one of the cornerstones of the Free World – that was Ilyin’s  post-war  vision for Russia.

While keeping his faith in the Free World and its good intentions, Ivan Ilyin in his later years began to comprehend that there were certain powers in the West (that same “world backstage” which amuses Barbashin and Thoburn) that targeted not only communism but Russia itself, and in particular – were trying to tear Ukraine away. His essay What Dismemberment of Russia Entails for the World is an example of Ilyin’s brilliance and foresight as a political analyst.

Nor is the positive political program of creative nationalism passed on to Russia by “Putin’s philosopher” of any less value. Amazingly, Foreign Affairs cites Ilyin’s formula of love and freedom as if it were incriminating evidence of the most shocking sort. But in my view his formulation, in its affirmation of freedom, warrants comparison with the words of Jefferson, Madison or Hamilton:

‘He who loves Russia should wish for her freedom; first of all for the freedom of Russia proper, her international independence and self-sufficiency; freedom for Russia—as the unity of [ethnic] Russians and all the other national cultures; and, finally, freedom for the Russian people, freedom for all of us; freedom of belief, the search for truth, of creativity, work, and property.’
(NB: in Foreign Affairs translation “property” is replaced by “ability”).

The Russian-American team of authors are clearly opposed to all these values. Does this mean that they presume that American foreign policy should deny Russia’s freedom, its international independence, deny the unity of Russians and all the other national cultures, deny the freedom of Russian people, deny their right to freedom of belief, the search for truth, of creativity, work, and property?

Are these things “fascism”?

We have no doubt that many people in Washington view Russians, Russian philosophy and Russia itself in this very same manner. But this makes all the more worthy of attention the following statement by the authors: “despite mountains of evidence to the contrary, only five percent of Russians believe that their country or the Donetsk People’s Republic had anything to do with the downing of Malaysia Airlines Flight 17”.

Isn’t this too many lies for such a prominent political magazine? Does this mean that Russia’s and the Donetsk People’s Republic’s alleged fault for the downing of  Flight 17 is also a lie?

Here is another notable line: “The reasons that Ilyin gives as explanation for the West’s supposed hatred of Russia are voiced daily on Russian television: the West does not know or understand Russia, and it fears it.”

However, ignorance and fear make poor allies. Not only for building constructive relations with Russia, but also for confronting it. 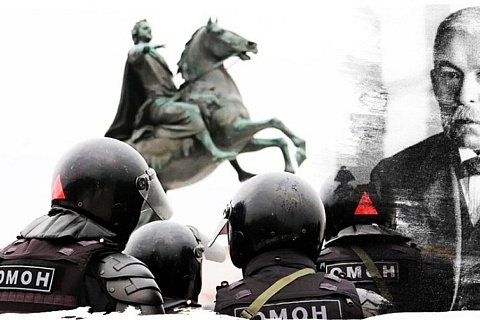 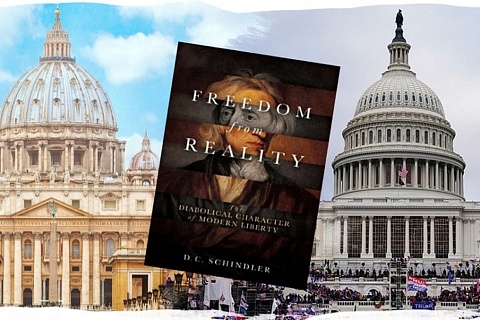 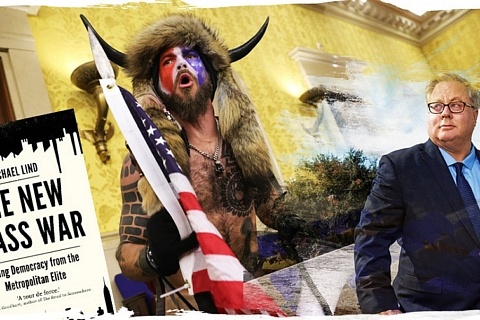